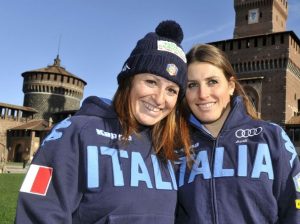 Lake Louise is somewhat of a lucky charm for the talented but unfortunate Fanchini sisters. Out of the five podiums they have collected in the World Cup, all in downhill, three have come in the Canadian resort.

At the end of 2005 Elena, the elder of the two, won the race at only 20 years of age confirming that the silver medal she had won seven months previous at the World Championships of Santa Caterina had been no bluff.

Unfortunately, since that glorious day, Elena has only experienced suffering and disappointments the last of which came right on the eve of the current season when she broke the upper part of her tibia during a training session at Hintertux, Austria.

That’s why she has not been a participant in Canada, watching the races from the comfort of her home instead, in Montecampione (Brescia), where she will no doubt have been cheering on her younger sister Nadia, who managed an emotional second place, beating her previous best of third from 2006.

Even Nadia has not had the easiest of careers so far. Health and injury problems have interrupted her rise to the top on more than one occasion but the 22-year-old has age on her side and she will have occasions to make up for lost time. She certainly has the talent and the determination.

Now it is up to Elena to show that she has what it takes to come back from a bad injury, despite the fact that she has already undergone numerous operations on her knee for ruptured ligaments. She is now undergoing long session of physiotherapy in the swimming pool and will only be back on skis come March.