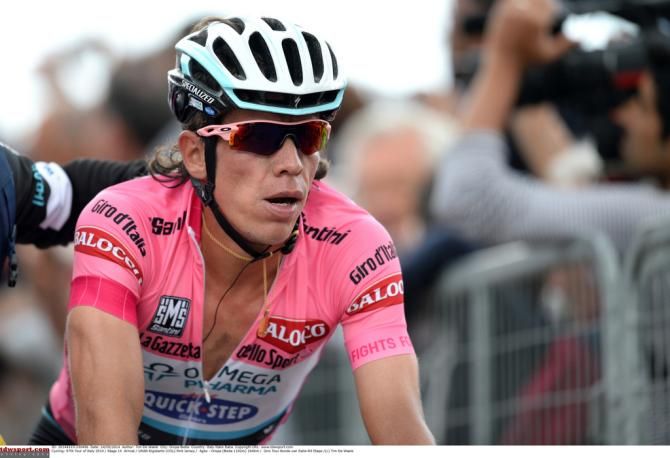 Rigoberto Uran (Omega Pharma-QuickStep) was not happy after a bad day on the stage to Oropa but was all smiles and happy during the race leader’s press conference at the summit of Montecampione. He had extended his lead on nearest rival Cadel Evans (BMC) to more than a minute and showed that he has the climbing ability to keep all his rivals in check and retain the maglia rosa beyond the third rest day.

“I’m happy because it’s Sunday, in theory it’s not a working day and I don’t usually train on a Sunday. But we’re racing and so I’ll enjoy my day off tomorrow,” he said with a smile.

“I actually felt better today. Yesterday, I had an average day and perhaps paid for the efforts of the time trial. But I like long climbs like this one, and so I didn’t have problems.”

He made it clear the pink jersey is not weighing on is shoulders.

“No. It weighs 200g or something. It’s not heavy at all,” he said. “I’ve ridden the Giro d’Italia four times and so I’ve got a bit of experience. I tried to go with Aru when he attacked but he was very strong and very hungry to win. I preferred to go at my pace and forget about him. [Nairo] Quintana set a good rhythm too and so I kept going hard. I lost a few seconds but it’s no problem.”

“I was a bit better than yesterday and I expected the others to attack me but I was surprised by [Fabio] Aru. I saw him at last year’s Giro and I remember he went really strong in the last week. He’s young and still has a lot to learn but he’s a good rider.”

Uran included the young Sardinian in his list of rivals and overall threats for the final stages of the Giro d’Italia when the racing resumes on Tuesday, after Monday’s third rest day in Ponte di Legno, in the shadow of the mountains that will decide the overall winner of this year’s race.

“After the time trial, I said that there were four or five riders up there who could win the Giro. Cadel is one of them because he’s got
experience and knows how to race for three weeks. The others are Quintana, Aru, [Rafal] Majka and [Domenico] Pozzovivo. They’re the ones who will be up there. We’re all of similar strength, so it’s going to be a close race.”

Uran is worried about fellow Colombian, Quintana, who again gained some precious time in the final kilometres of Montecampione, even if he remains 2:40 minutes behind.

“You can’t save anything on a day like today and so I don’t think Nairo is holding anything back, I think he’s at his best. He’s strong and I’m sure he’ll be stronger next week. But I hope to be strong too.”

A hero in Colombia

Uran has become a national hero in Colombia after winning the Barolo time trial and taking the pink jersey. He was already hugely popular and was often stopped in the streets but admits that he’s surprised by all the attention and support from Colombia.

“All the support means a lot. In Colombia, the people are cheering for me. They’re watching the TV and following the race. I’m slightly surprised because I’ve had a lot of messages of support,” he said talking about the impact of the new generation of Colombian riders.

“Cycling has grown at lot in the last three or four years and we’ve got a strong generation emerging that includes [Julian] Arredondo, Quintana, [Carlos] Betancur and me too. We’ve got eight years or so of great cycling ahead of us, not only on the climbs but also in Classics and I even won the TT. It means were not only climbers…”

Sorgente: Uran all smiles after a good day on the climb to Montecampione | Cyclingnews