He even surpassed Al Capone. He ended up in bed, in a pool of blood, dead. The fall of the idol 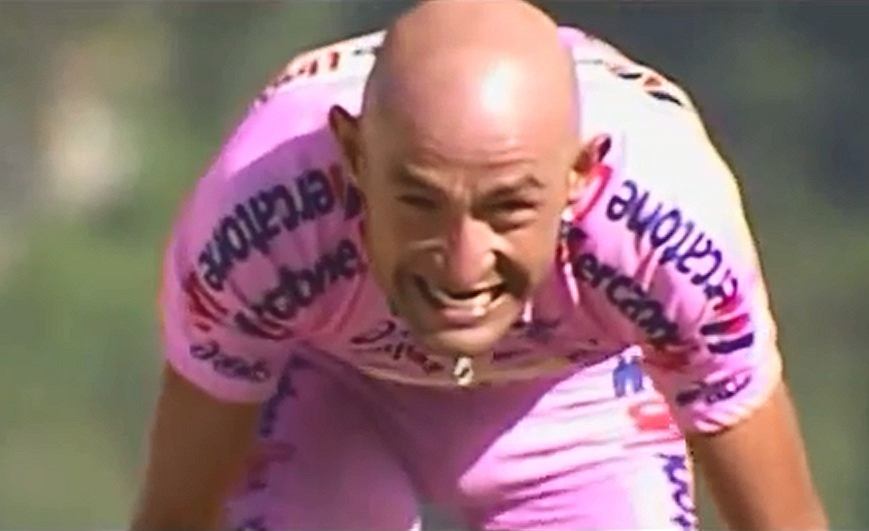 Few fans care about the problems and failures of Jan Ullrich, Lance Armstrong also ended up in the dustbin of history. From the EPO days, only Marco Pantani, who strives to win in a similar way, still has his defenders, devoted admirers and whitewashing journalists. When his photos are posted on the fans’ Instagram account, the comments include declarations of love, assurances of his innocence and words of despair, because fans – after 18 years – have still not come to terms with his death. So they multiply conspiracy theories to explain its fall and end in a more accessible way.

Italians loved him. They needed an idol, and he had success, a spectacular style and personality

– He cheated? And who was clean then? – Italians have been shrugging their shoulders for years when someone tries to crush his monument. The real one, standing in his hometown of Cesenatico, is visited by 50 thousand people every year. people. The same number of candles is lit on his grave. His countrymen still love him. Last year they collected 50 thousand. euro and erected another monument to him. The six-meter steel colossus stood at the iconic Plan di Montecampione ascent, where Pantani wrote one of the most epic cycling acts in 1998 at the Giro d’Italia, ahead of exhausted rivals in spectacular style. They captured it on the basis of a famous photograph – triumphant with outstretched hands and eyes directed towards the sky.

In the mid-90s, Italians needed a great sports idol, and he had everything to make them fall in love with him: great results, great style, complicated character and personality. Wearing a bandana and earrings, he smiled from the covers, sang in San Remo and visited John Paul II. He has become a global cycling ambassador. When he got out of the saddle and rode away from his rivals, the fans stood up in front of the televisions with him. When he fell or collided with a car, they held their breath and then marveled at his returns. He was petite, but he did not bow to any slopes. He rode like Maradona dribbled. Boldly, spontaneously and without any calculations. The crazier the plan, the more willingly he implemented it. He always believed in his acceleration. – You do not even know how pleasant it is to pass all these competitors and watch them suffer – he said swaggeringly after the races, and the Italians sipped his words from his mouth. “I was an artisan, he was an artist,” admitted Armstrong ten years after his death.

Premature, because the similarities to Maradona did not end with an extraordinary sports talent. They both fell in love with the Italians and got lost in the maze of life. They had not fans, but followers who could forgive them everything. And they had the same drug for fame – alcohol and drugs. They had met even a year before Pantani died. Maradona then ran away from addictions to Fidel Castro. Pantani was in Cuba with friends. He went to the La Pradera clinic and asked the doctors to tell Maradona that he wanted to see him. They talked.

A few days after Pantani’s death, journalists placed Maradona on a microphone. – We knew each other. I got to know his story. When he won, everyone was close to him. When he was in trouble, everyone abandoned him. We are all to blame: me, his relatives, you – he addressed directly to the journalists around him.

Marco Pantani ran away from people instead of the peloton

Everything ends and begins on June 5, 1999. Marco is at the height of his fame. A year earlier, he won the Tour de France and the Giro d’Italia, and is now racing for another triumph at the Giro. He has a five-minute advantage. But in the morning the inspectors appear and randomly check a dozen or so cyclists. The bane of discipline is then erythropoietin (EPO). The auditors already know that all the leaders are cheering on this hormone, which improves the body’s efficiency and increases exercise capacity, but they do not have tests that could prove it. The gateway is to check your hematocrit level – the ratio of red blood cell volume to whole blood volume. If it exceeds 50 percent, the athlete may be suspended “for health purposes.” Pantani’s hematocrit is 52 percent. The confusion is enormous, but the law is absolute. Marco is suspended. He breaks the hotel window in anger. Blood is flooded all over the hand.

But his followers do not believe it. A narrower plot, they suggest the participation of the mafia, which in the event of his victory would lose gigantic money in bookmakers’ bets. More rational people wonder how it is possible that the great master fell so easily. Matt Randell, Pantani’s biographer, found that the doctor of the Mercatone Uno-Bianchi team Pantani had ridden in the previous night had gone to a party, played all night and had not checked his results in the morning. However, the contestant himself probably drank enough water to distort the test and get the correct result. Except he was expecting the controllers around 6:30, and not more than an hour later. Time mattered.

The great champion started to run away from people instead of the peloton. He has already participated in many accidents, on the route between Milan and Turin he collided with a car, but it was the fall of his legend that was the only one that he did not manage to recover from. He even cut himself off from his loved ones. Two hundred journalists camped outside his house, and he howled into his pillow. And only drugs gave him apparent relief. Pantani considered the removal from the race to be part of the conspiracy. He became suspicious, he felt under attack. Maybe the hunt was ordered by the mafia? Maybe the highest authorities? “I was abused by the media,” he said in an interview after returning to law enforcement. After ten days, he admitted to his mother that he had tried cocaine. Over time, the mixture of drugs and psychoactive substances became his favorite. But the others did not suspect anything for a long time, because his trained body camouflaged everything. Including depression. During this difficult time, Christina Jonsson was with him, a longtime partner whom he always cheated on and with whom he constantly argued. But she, too, was fed up with his drugs and hallucinations.

The gigantic fame tormented him, but only the fall from the summit turned out to be fatal. After that story in 1999, he returned to sport, but not as before. In 2003, he finished the last Giro in his life, took 14th place, but the last streak of doping accusations took him away from his joy. Pantani never chased after popularity. And certainly not for that. He didn’t want to explain himself. “Eighty percent of people think I’m a cheat anyway and want to deprive me of what I’ve achieved,” he complained. He was quiet and shy. When he came to his mother’s queen for his first trainings, he was ashamed to overtake his friends. He was embarrassed by being first and stepping forward. It broke down over time, but as an adult, he still considered popularity a tax on winning. “I started for fun, but then cycling became my profession,” he said towards the end of his career. And life.

The truth never got in the way of the narrative. Pantani’s followers refuse to believe in doping and suicide

In the morning he called the reception of a secondary hotel in Rimini complaining about the noise behind the wall. The next room was empty, but Pantani could hear screams. He demanded that the police be called. He was also mentioned by local basketball players who had a pre-match training camp in the same hotel, that he would go out into the corridor and talk a lot. He was to doubt if “there was any tomorrow for him.”

The next day, February 14, 2004, the cleaning lady was unable to open his room. The door appeared barricaded. Only in the evening, another hotel employee forcibly got inside. The room was demolished – mirror on the floor, broken air conditioning, sheet rolled up and tied to the railing, microwave oven torn from the cabinet. Furniture pushed against the door to act as a barricade. Medicine wrappers and cocaine marks everywhere. Behind the bed, in a pool of blood, him. An autopsy showed that his body contained large amounts of cocaine, psychoactive substances and alcohol. Investigators and doctors said he had attempted suicide by other means before he overdosed.

But not everyone believed it. Tonina Pantani, the cyclist’s mother, argued from the very beginning that her son had been killed. She hired more experts to throw up stranger and more elaborate causes of death to the public, consistently claiming that the investigation was full of errors and omissions.

For example, they claimed that someone had visited Pantani on the day of his death. In their opinion, there were three jackets in the wardrobe, although the cyclist was supposed to come to Rimini without a suitcase. Wounds and bruises on his body were supposed to indicate a beating. Investigators ruled out this version of events. They were also not convinced by the fact that in Pantani’s room the remains of Chinese cuisine were found, which the cyclist hated. Rendell, the author of the book, analyzed all the evidence and agreed with the investigators. But the truth never prevented Pantani’s followers from preaching their narrative about the murder. They even snapped up the testimony of Fabio Miradoss, his favorite dealer, who said to “La Repubblice”: – Pantani never snorted cocaine, he smoked it. Meanwhile, an autopsy showed otherwise. In addition, we agreed that Marco will have 20,000 with him. euro. The policemen did not find the money. Someone took them? Someone was in Pantani’s room? Someone killed him? It wasn’t suicide. Whoever faked them knew little about Marco.

Even ten years after Pantani’s death, “La Gazzetta dello Sport”, the most widely read newspaper in Italy, reported on its cover: “Pantani was murdered”. This time she relied on the findings of Professor Francesco Avato, a specialist in forensics, who concluded that the concentration of drugs in Pantani’s body was so high that the cyclist had to drink cocaine dissolved in water. What – this is another version of the story – was someone to force him to do.

In 2016, the third investigation into this case was definitively closed. Once again, no evidence of the involvement of other people was found. But Pantani’s followers have once again disregarded the investigators’ findings, just as they have downplayed his findings over the years, which clearly show that he too, like Ullrich and Armstrong, was doping. “People followed it because their emotions when they think of Pantani are also infected with certain chemicals,” said Rendell.

Sorgente: He even surpassed Al Capone. He ended up in bed, in a pool of blood, dead. The fall of the idol | 247 News Agency