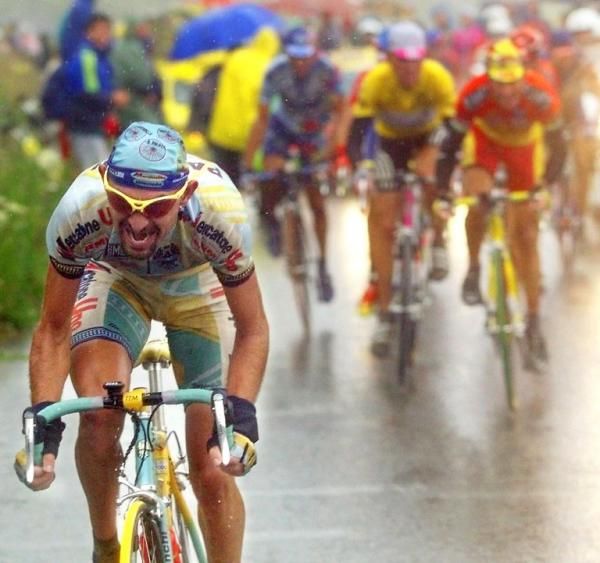 We’ve been scouring the web for retro bike deals and found this Bianchi Mega Pro Mercatone Uno for sale on eBay.

The bike, dating to the late 1990s, is from the same range as Marco Pantani‘s own Mega Pro XL Reparto Corse, with the Reparto Corse (Bianchi’s racing department) signalling a hand-built frame for their top pro racers. This version of the bike, however, would have been raced by the team’s domestiques.

Check out the bike on eBay here

Pantani did the Giro d’Italia – Tour de France double using the Mega Pro in 1998, the last rider to have achieved the historic feat. This Mega Pro, listed for £886 ($1,100) comes decked out in the same colour scheme as the bikes the Italian and his Mercatone Uno team raced that year.

Full details on the build, which has a 57.5cm traditional frame, are quite vague, though the bike does feature a Campagnolo groupset, albeit a mix of entry- and mid-level components from the 1990s, including triple chainring and 8-speed cassette.

The front derailleur, brakes and shifters are Avanti, while the short-cage rear derailleur is Mirage. The wheels are by French manufacturer Rigida, while other components such as the saddle and stem are Bianchi’s own brand.

Still though, despite some components not being in top nick, there’s potential for a nice retro build here. Pantani rode to victory on a 9-speed Campagnolo Record groupset, Campagnolo Nucleon wheels and the famous customised Selle Italia Flite saddle.

Pantani’s victories on the bike went down among cycling legend as the cycling world crumbled in July 1998. A couple of months earlier he had beaten Pavel Tonkov to the Giro title, winning two stages, including a dominant ride on the Plan di Montecampione.

Come July and the Tour, he was still in impervious form as the Festina scandal erupted in France. An attack on stage 10 to Luchon gave a taster of what was to come before he won by 1:26 the following day on Plateau de Beille.

His most famous moment, however, came in the dire weather on Les Deux Alpes. Attacking early in the rain on the Galibier, he simply rode away from reigning champion Jan Ullrich, who at that point was in the race lead, three minutes up.

A long, cold descent gave way to the climb of Les Deux Alpes, where Pantani flew, ending up nine minutes up on the suffering Ullrich. It was one of the great rides of the modern Tour de France, even if later scandalous and tragic circumstances would overshadow it.

You likely won’t be able to replicate what Il Pirata did on his Bianchi Mega Pro, but if you’re a fan then it’s going to be hard to get any closer.