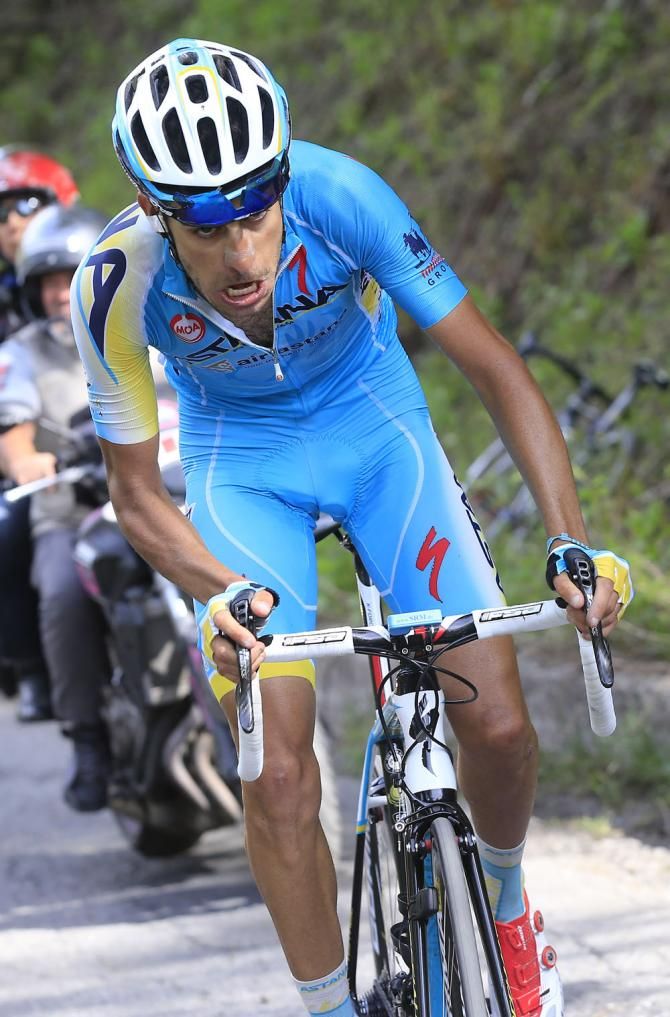 Inevitably and unfairly, the win will draw comparisons with Marco Pantani. On a day when the Giro d’Italia paid another tribute to the late climber, Fabio Aru (Astana) followed in his wheel tracks by claiming a solo victory atop Montecampione on stage 15.

Indeed, Aru’s second, decisive acceleration came with 2.3 kilometres remaining, not far from the spot where Pantani finally rid himself of Pavel Tonkov at the 1998 Giro. Aru’s manager, Giuseppe Martinelli, meanwhile, was Pantani’s directeur sportif during those years of ultimately fatal excess.

Monday morning’s headlines will write themselves, then, but on crossing the line, Aru dealt cautiously with the inevitable questions comparing his victory with Pantani’s triumph of sixteen years ago. “For me it’s a huge satisfaction to win here because Pantani was an immense champion, a fuoriclasse,” Aru said. “But I’ve only done something quite small in comparison to what he did. I’m just happy to have won here.”

The Giro has rightly remembered Pantani on the tenth anniversary of his death, but the decision to bring the race to Oropa and Montecampione has perhaps celebrated improbable feats to the detriment of paying a more meaningful tribute to a human tragedy.

“Pantani was a fuoriclasse, who excited the crowds. Even today you can read his name written all over the road on the climb,” Aru said when asked what Pantani represents to the young Italian riders of today. “As a generation, we’re focused on doing well, and there are a lot of Italian riders right now who are doing that.”

Aru’s victory came on a stage where many expected Nairo Quintana (Movistar) and Domenico Pozzovivo (Ag2r-La Mondiale) to land the decisive blows. Instead, after a series of tentative moves in the pink jersey group came to nothing, Aru seized the initiative with a rasping attack just three kilometres from the summit.

Race leader, Rigoberto Uran (Omega Pharma-QuickStep), moved deftly onto his wheel and together, the pair bridged across to the earlier escapees Pierre Rolland (Team Europcar) and Fabio Duarte (Colombia). Rather than stand on ceremony, however, Aru simply kicked once again after making the catch, and the mountain opened before him.

As Uran struggled behind and Quintana battled to get back on terms, Aru took flight, repeatedly surging out of the saddle to pad out his advantage on those behind. “I didn’t believe I had it won until I crossed the finish line,” he said, oblivious to the fact that the gap to the chasers continued to yawn open.

Aru reached the summit 22 seconds up on Quintana and 42 ahead of Uran, and also gained 57 seconds on Rafal Majka (Tinkoff-Saxo) and 1:13 on Cadel Evans (BMC). The win moves him up to fourth place on general classification, 2:24 minutes down on Uran but only 34 seconds off a podium place.

“I’m living day by day at this Giro, I’m here to grow. This victory gives me morale but it doesn’t change my outlook from before,” said Aru. “I didn’t know how things would go today, and when I attacked, I didn’t know if I’d be able to hold out and have the energy to make it. I just thought about pedalling as hard as possible.”

Aru made his Giro debut twelve months ago in the service of Vincenzo Nibali but since this year’s race began in Belfast, he has been reluctant to make any bold declarations about his prospects. Even after landing his first professional victory, the 23-year-old was keen to keep a cap on expectations.

“I was here last year, but it still feels strange to race with the big–name riders. I have to pinch myself sometimes,” he admitted. “When I attacked, I struggled to believe I’d stay away, so that’s a new feeling.”

The quietly-spoken Aru was a latecomer to road cycling but made up for lost time after leaving his native Sardinia as a teenager. “Before that, my parents used to pay for flights for me to race on the mainland,” Aru recalled. “I’d fly on Saturdays, race on Sundays and then I’d fly home on Sunday night to go to school on Monday morning.”

This time around, Aru did his flying on Sunday afternoon, and on Monday morning, he awakes within touching distance of the final podium of the Giro d’Italia.