No rider has achieved the Tour/Giro double since 1998, the year that Marco Pantani went from being a hero to a true legendPhoto: L’Equipe 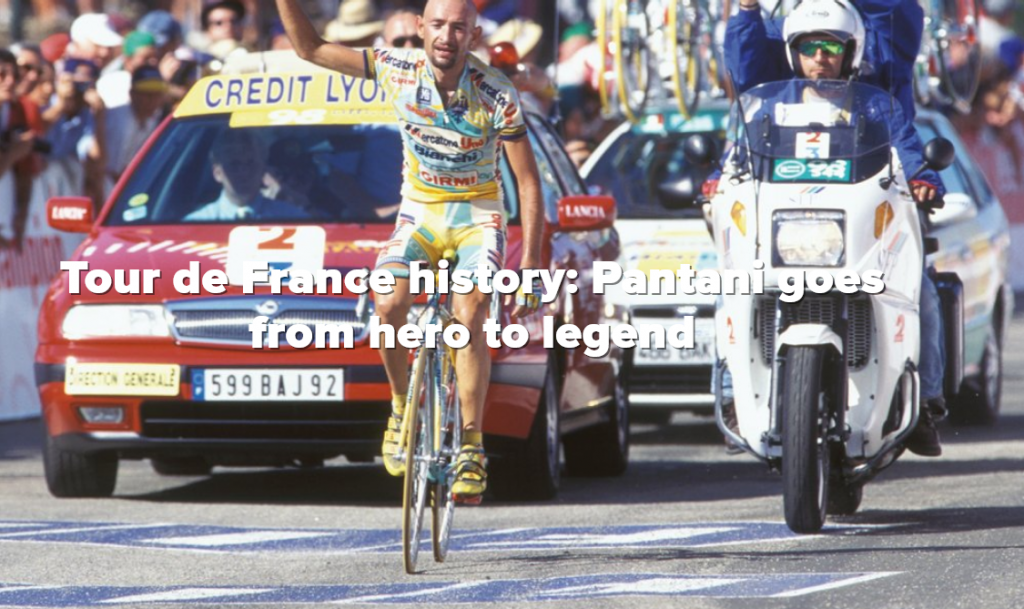 The list of riders to have claimed both the Giro d’Italia and the Tour de France in the same season is a short one. Until 1998 it contained just six names, unsurprisingly all giants of the sport: Coppi, Anquetil, Merckx, Hinault, Indurain, Roche. No need for first names. Then in July 1998 came a seventh rider: Pantani.

Born in 1970 in Cesena, Pantani had risen steadily through the Italian amateur ranks. He won the Baby Giro in 1992 and turned professional with Carrera.

Two years later he broke into the Grand Tour elite when he won back-to-back stages at the Giro on two monstrous days in the Dolomites, riding impressively over such feared climbs as the Stelvio and Mortirolo and finishing the race second overall.

‘A 24-year-old boy, born in Cesena, is perhaps the great climber that Italian cycling was waiting for,’ wrote Gianni Ranieri in La Stampa. Six weeks later Pantani took third overall at the Tour.

By the time 1998 rolled around, despite having been dogged by misfortune and sickening crashes, Pantani had a number of impressive Tour stage wins to his name, including a brace of victories on Alpe d’Huez.

But he had not been able to better second and third overall at the Giro and Tour respectively. All was soon to change. In early June he broke his Grand Tour duck by claiming the Giro, cementing his overall win on the climb to Plan di Montecampione. Then came the Tour.

The 1998 edition was plagued by scandal before a single rider had even turned a pedal. In the run-up to the race, a car driven by Willy Voet, a soigneur on the Festina team, had been stopped and searched on the France/Belgium border, his car found to be full of banned drugs of almost every sort.

Voet was arrested but the Festina team still took to the start line. Soon team hotels and buses were being raided and entire squads taken in for questioning. Riders threatened to go on strike and staged sit-ins over what they saw as invasions of privacy. The Tour descended into chaos, the actual racing lost among all the controversy.

For a time it looked likely that the race might not even get to Paris. The events were an embarrassment to all sport, never mind just cycling, and it was against this background that Pantani rode himself into the history books.

Master of the mountains

Every cycling fan knows the importance of time-trialling in a Grand Tour. Cast an eye backwards from 1998 over the preceding 20 years of Tour results and you find every winner bar one took time over the eventual second-placed rider in at least one TT– the sole exception being Greg LeMond, who trailed Bernard Hinault in all three solo efforts in 1986.

Pantani was different. He was a pure climber, a man who needed the long and high climbs of the Alps and the Pyrenees to shine rather than the tick-tock of the clock. Over the course of the 1998 Tour he lost more than seven minutes during time-trials to second-placed Jan Ullrich, but it didn’t matter. It was in his mountain playground that Pantani went to work.

First he soared to a stage win at Plateau de Beille, where this picture was captured, escaping 12km before the finish and taking 1min 40sec out of the yellow jersey-wearing Ullrich.

Stage 15 was 189km from Grenoble to Les Deux-Alpes and took the peloton over the Croix de Fer, the Télégraphe and the Galibier before a final climb to the ski resort.

It was the first time that Les Deux-Alpes had featured on the Tour and the weather was miserable. The scene was set for a stage that would turn into a classic.

On the Galibier Pantani attacked and quickly distanced Ullrich. The German watched the Italian disappear, had a chat with his sports director and then did nothing. After all, there remained around 55km to the stage finish, with a technical descent and a final climb still to go once they had crested the Galibier. Surely this was a move born of desperation. But Pantani had committed and rode on.

Standing on the pedals in his unique, crouched way, the diminutive Italian tamed the Galibier. At the summit he had an advantage of more than two minutes. While it had been a devastating attack, he still needed more time if he was to end the day in yellow.

Pantani dropped from the Galibier, flew down the Lauteret, hung a left by the Lac du Chambon and then waltzed skywards towards Les Deux-Alpes. Clad in wet and lurid Lycra, his shaven head covered with a bandana, his face grim with pain, he found nearly nine minutes on Ullrich to take over the race lead.

On that sodden day in the Alps, Pantani was untouchable. It was one of the great attacks of the modern Tour and monuments would be erected on the Galibier and in Les Deux-Alpes to recall the moment. Six days later he stood in Paris wearing yellow as only the seventh rider to record the Giro/Tour double.

The Italian never again reached such heights. Distraught after being thrown off the 1999 Giro while wearing pink after failing a ‘health-check’ – his haematocrit level breaching 50% – Pantani declared he had been betrayed and would never ride again.

In time he would step back from that threat and return to racing, claiming further Tour stage wins, but he remained a troubled man and died on Valentine’s Day in 2004, alone in a cheap hotel in Rimini. Cerebral and pulmonary oedema was the official cause of death, with the coroner’s report stating it had been brought on by ‘acute intoxication from cocaine’.