Gallery and words from riders past and present 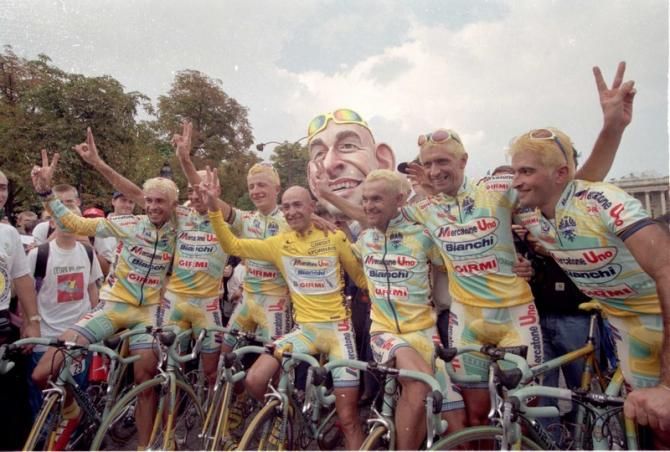 Bleached hair and the maillot jaune in Paris for Marco Pantani and his Mercatone Uno teammates (Image credit: Sirotti)

Nine years ago today cycling lost one of its most talented and loved characters, Marco Pantani.The Italian was considered by many as the greatest climber of his generation. Cyclingnews takes a look back at his career, through the words of other riders and the people who knew him.

He spectacularly won both the Giro d’Italia and the Tour de France in 1998, the last rider to win both in one year. But in next year’s Giro, he was removed from the race, which he was leading, with only two stages to go due to a high hematocrit level. Pantani returned to racing the next year, winning two stages at the Tour de France, but he was never the same again. The Giro d’Italia 2003 was his last race ever and he tragically died on February 14 2004, alone, in a hotel room.

I think my best memory is of the last stage in Paris when he won the Tour in 1998. There we all were, with our hair dyed and our ear-studs, as we’d promised him at the start of the Tour. At the Giro it had been shaved heads, this time the bet was yellow hair. We’d taken it on partly because we weren’t all that confident about his chances in the Tour, to be honest. Let’s just say that there were a lot of parties after the Giro, and he hadn’t trained too much. But then Marco never really was a great planner; he was impulsive – he just got to France and suddenly decided that he would go for it. In the first week, he looked nowhere near fit; I can remember him really having a hard time on the flat a few times. Then of course he won at Plateau-de-Beille, then came the famous Les Deux Alpes stage. Even after that, though, we were quite anxious.

The next day he managed to stay with Ullrich over the Madeleine, but Ullrich’s attack had been a clear sign that he was determined to make Marco’s life difficult. Marco admitted to us that night that he’d been absolutely on his limit behind Ullrich. We were worried not only because there was a time trial left, and that was Ullrich’s speciality, but also because he seemed fresher. Fortunately, Marco held on and we all ended up with blonde hair…

Do I still think about him? Of course. He was this great binding force in the team, and we were all so close. Like everyone else, I wish I could have helped him, but then, as we say here, the cemeteries are full of hindsight. Also, Marco never asked for help; if he had, I think his ex-teammates would have been at the front of the queue. His stubbornness had been his strength, in adversity, and now it turned into his weakness. He’d always worked through everything on his own, and he seemed to think that’s what he could do with the problems he had at the end.”

Marco captured everyone’s attention in Italy when he attacked in the mountains and won the Giro and Tour. I was just a kid at the time and he was my idol but I can remember how the whole country cheered for him in the bars in the summer, when the Giro and the Tour was shown on television.

Personally my memories of Pantani are good memories, notwithstanding what happened later in his life and the problems he had. He was a true great of the sport and I’ll always remember him that way.

For me my best memory of Marco is very simple – everybody talks about the races, the Giro, the Tour. But for me it was the victory in 97 on Alpe d’Huez. Because it was two years after he had been stopped. Two years since he had fallen and his leg was broken, since he had left and not won the tour, and it was the victory where he was happiest. It was an unforgettable day.

What made him special was something I came to take as a given with him. When he took on a climb, he won. It’s something that stayed with me, and it’s something that remains with the tifosi. If today he knew for sure that tomorrow’s stage would finish with a climb, he would attack, and he would win 90 percent of the time. Now, what’s missing and what was his alone at the time, is that one rider can attack and win. Now, a rider attacks and it’s possible that seven different riders can win. When Pantani attacked, it was certain that you could turn on the television and watch him win. That’s the impression of Marco that has remained with me. When he attacked, he won.

I’ll always remember Pantani for the way he dropped Pavel Tonkov on the climb to Montecampione in the 1998 Giro d’Italia. I can remember watching it at home and jumping up and down on the sofa. Pantani always got rid of things before he attacked, be it his famous bandana or even his piercing in his nose. There’ll never be another climber like Pantani.

For the record, I was a big fan of Marco’s. He was an amazing climber and seemed to be able to dance on the pedals like no one else could. I remember watching him on TV winning stages of the Tour from back in the USA in total awe. When we got to the 1998 Tour he was one of the favorites, but when he got last in the prologue, I thought to myself that he switched off after his Giro win. When the rest of us were up boxing in the crosswinds during the first week, he sat at the back surrounded by his teammates as if he wasn’t worried at all about getting caught out in a split.

I kind of forgot about him up until the first mountain stage where even though he didn’t win, he dropped us with such ease it was startling. I kept thinking that I had an advantage over him and didn’t need to worry about him for the GC, but he kept chipping away and gaining time on all of us on every uphill finish. He was back in the mix, but was he really that dangerous?? Well, that question was answered on the Galibier. When he attacked on the climb, I remember him looking back with a grin on his face to see if anyone was on his wheel….we weren’t even close! Many kilometers, a cold, tricky descent, and a final climb to Les Deux Alpes later, he had taken the yellow jersey. For sure he was going to lose it in the final TT right? No, he rode the TT of his life and actually finished in 3rd place on the stage, easily keeping the yellow jersey. I didn’t speak much with him during the 98 Tour, but a few years later he came up to be in a race and said, “ciao Julich” with that same grin that he had on his face as he dropped us years earlier on the Galbier. Those 2 words are my fondest memories of Marco.

He was the most stylish climber I’ve ever seen. It was 1992 or 1993 and I’d gone back to Carrera. I remember him really well actually even though he was a young pro. Let’s say there were 50 guys he’d always be in 49th place. If there were 15 he’d be in 14th and if there were 10 he’d be ninth. You’d be calling him through to work and he’d just say ‘fatigue’ fatigue’. But then you’d get down to three and he’d be getting stronger and stronger. He was great rider, smart and strong.

But he was a guy that would really listen to someone. He had a lot of respect for me, and I appreciated that. What made him special was of course his climbing. It was all about his cadence because he could really stamp on the pedals but he could go and go again on the climbs. It was attack, attack, attack and he was up there with the best climbers.

It was very unfortunate what happened to him. He was always the kind of guy who liked to meet up with friends in bars and clubs and it was very unfortunate how he was left on his own. He was also really targeted and I don’t think he could cope with it. He ended up finding himself all alone. I know the Carerra team were really close to him but they have deep regrets today but at the time no one could ever see it was as bad as it was. They tried helping him and they tried getting him back to normal but there was always someone in the background pulling him down.

But as a character, as a man, he was just so charismatic. He had an incredible charm, with the eyes and the smile, a real charmer. He was the rider of the 90s. As a climber and as a Tour rider.

I raced at the same time from 1999 to when he passed away. I remember a lot of his big wins because they were so spectacular in the way he won them. I wasn’t a great friend of his but we spent some time together after stages. He was very charismatic. He was quiet and a little shy but enjoyed other people’s company. He was a special person.

His career and life happened before I was even a cyclist but obviously I’ve seen reruns of Giro d’Italia and Tour de France videos. I guess the most vivid vision I have is him climbing in the drops and flying up the climbs. He was the best climber of his generation. No doubt.